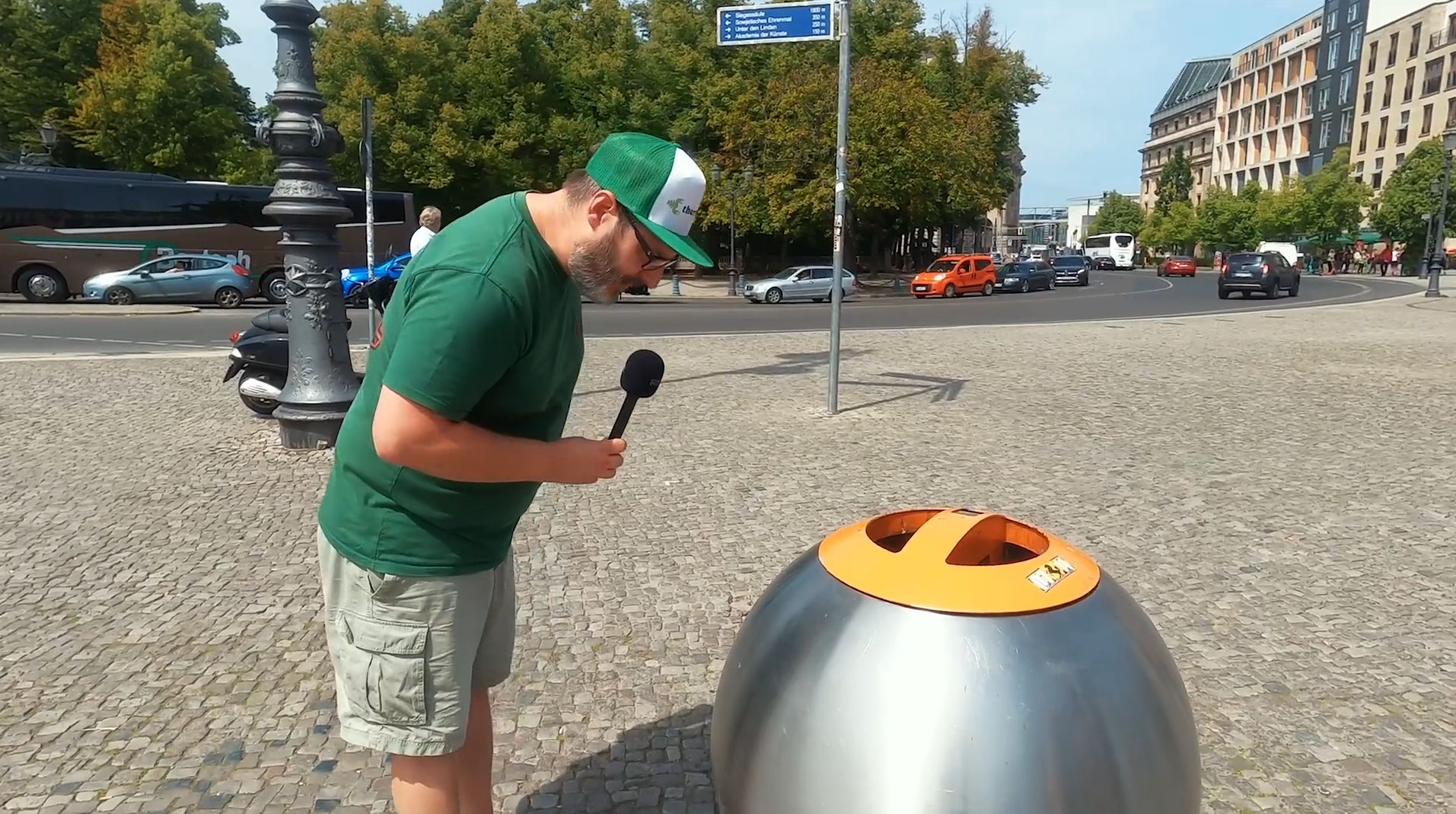 Trash Talk: Hitting the streets of Berlin to gauge the appetite for rec use.

Berlin. Beautiful Berlin. Where the pilsner flows as smoothly – and consistently – as the mighty Spree. Where hirsute hipsters rub shoulders with metropolitan moneymakers. Where still-present Wall remnants serve as a pertinent reminder that this richly textured, lo-fi metropolis was a once divided city.

But progress measures itself in the most surprising ways. And fast forward 30+ years from unification and it seems that Germany’s taking another bold and historic step.

Yup, it’s all set to legalise recreational cannabis in the next year or two.

Official plans are afoot to make this nation of 80+ million into the single biggest adult use market in Europe. So where better to hold the International Cannabis Business Conference’s summer bash than in the nation’s capital?

It was amongst this humid breeze of optimism that delegates from right across the globe came to see what the fuss was about; and ultimately to discover how and if they could get ahead of the game.

And even though everyone was making the right noises – where regulation, taxation, social equity and access were concerned – the biggest question remained a loud resounding ‘When?’.

Getting Down On The Floor

I’ve said it before, and I’ll say it again: Cannabis trade shows are unlike any others you’ll encounter. It’s as if 15 different sectors ran into each other headfirst in a revolving door, somehow got mixed up, and then discovered that they were all heading to the same destination after all.

There’s an inherent eclecticism that’s equal parts corporate, chemical, consumer, and good old fashioned ‘cannabis leaf’ motifs on just about everything. And that’s exactly the scene that played out on the show’s floor.

One of the most impressive things about ICBC Berlin was its size – a girthy beast of some 140-odd stands and 7000 sq metres (just over 75,000 sq ft for you imperialists out there).

Everyone from Ascera Vapes to the Uruguayan Government – as well as a Thai trade delegation, pre-roll cones producers, assorted processing machinery, CBD wellness galore, and a dispensary automation solution (an actual behemoth) – materialised between the show stands.

Then of course, there were the speaker sessions. And while we didn’t make it to all, those we did get to offered some unique insights.

For example – did you know that Australia has a medical cannabis patient list of some 300,000 people? That’s a hefty 1% of the population – especially compared with the UK’s paltry 0.02%.

Even fair New Zealand has 30,000 medical users – double that of the UK – a number that’s growing by 6% every month! (Hat Tip: Carmen Doran and Elisabetta Faenza).

For us thermidorks, ICBC Berlin was also a chance to get some fresh perspectives from other attendees – about the opportunities – and challenges – they see ahead for Germany as adult use takes root.

With that sentiment front-of-mind, we set to work getting some expert opinions; interviewing a whole host of insiders.

From the German market itself, we spoke to Stefan Röhrl from Hemp Group, Benjamin Patock from Boveda, and Dirk Heitepriem from BvCW. And those from outside of Germany we spoke to included Jill Reddish from GCNC (Global Cannabis Network Collective), Trenton Cooke from KookiJar, and Leo Kotlyar from DeWarrior.

Although we learnt that those in the know are understandably bullish (and very realistic) about Germany and cannabis, we felt it was only right to get some perspectives from your Average Jens. We took our GoPro out in the street (well… hotspots like the Brandenburg Gate and the TV Tower) and did our darndest to quiz locals (and tourists) about their take on cannabis in Germany.

The people we spoke to were at best ‘divided’ and at worst ‘ambivalent’ when it came to rec use cannabis legalisation – for all the usual reasons: it relaxes you (but it’s a drug), it’s harmless (but possibly addictive); they use it in Amsterdam (but it’s still illegal).

Essentially, the real feeling is one of uncertainty. It’s clear that for Germany to be successful in this regard, the cultural aspect of usage needs to be open and visible in the lead up to legalisation. And it kind of is – from what I could see.

Party All The Time

Any cannabis conference worth its terpene profile wouldn’t be complete without a party or two. While the main ICBC VIP event was a little more muted than one has become accustomed to – despite the presence of reggae sensation Morgan Heritage (ably flanked by one Rocker T) – being more an indoor affair in the sprawling Hotel Estrel complex, where the main event was held; the previous night’s shenanigans proved to be more entertaining.

After a smart early-doors connector event from the GCNC, the scene was set for delegates to further indulge their networking needs – with a stunning aerial view of Berlin as a backdrop.

Dab rig giants, Ispire, in cahoots with the MITA trade association, threw a helluva rooftop party – inviting all and sundry for a cocktail or five with the city’s skyline in full view. The only snag? Capacity limits applied. And once you got up there, you didn’t want to move on anytime soon.

The Art (?) of Procurement

But – there can be no fire without the proverbial smoke. And as you’d expect at a cannabis conference, there were plenty of exotic scents filling the night (and day) air.

That said, despite Germany’s progressive stance on recreational use, current forms of ‘acquisition’ are currently limited to illicit market sources. While I feel it remiss not to divulge that I managed to procure a small amount of flower, the methods of doing so were admittedly, somewhat nefarious.

If Telegram emoticons are to believed, I *think* the strain procured was a Lemon Haze of sorts. However, as for its provenance, cannabinoid profile, THC and CBD content, I hadn’t a Scooby Doo. But boy, was it strong. Super strong.

Despite being a medical user here in the UK – a few casual tokes was all it took me to reach a point of significant disorientation. So dialling it back was a tactical necessity – in light of the need to keep a steady pace. But then, that took the joy right out of consumption: leaving me in an “I want to indulge, but need to function” quandary.

Is this anecdotal evidence enough to justify the need for a legal rec market to take root? I should blinkin’ coco. We can easily fall back on the common arguments for a transparent supply chain, safer products, and taxation revenues. Germany knows it has much to learn: despite its eagerness. This is why they’re looking to other markets – Canada and the US in particular – to learn from the mistakes being made; to anticipate the teething problems that come with legalisation.

The hope is – from within the industry – that Germany will start a domino effect for legalisation across Europe. That it’ll lead the way in rigorous governance and figure out a firm but fair agenda for legislation.

It might put ‘Johnny’ out of business. But he seemed like a resilient, if not resourceful, guy. He’ll probably be running the show in a few years – because, let’s face it, without legacy operators leading the way, the legal market will fall flat on its face.

Only time will tell. But Berlin will thrive regardless.